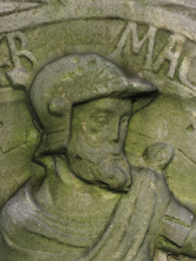 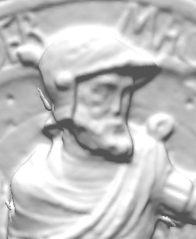 MeshLab is the first choice open source tool for generating meshes from point clouds. The software ist based on the VCG library by Visual Computing Lab ISTI-CNR and was developed at the University of Pisa, department for computer science.

Mesh denotes in the context of computer graphics a polygonal network for the geometric description of surfaces. The result of a 3D scan may be a point cloud or connected triangles. Both can be imported into Meshlab. Meshlab distinguishes two kinds of layers, mesh layer and raster layer. Mesh laer are designed to geometry. Raster layer store 2D textures associated with camera data. A workflow from scan to mesh goes the following steps:

The internet provides some manuals and tutorials for Meshlab. A short german tutorial can be downloaded from the link in the left icon here. The workflow in meshlab is sketched as follows: Basic material is a colored point cloud (figure top right). The first step Filters > Sampling > Poisson-disk Sampling decimates the nuimber of points. A new layer labeld Poission-disk Samples will be generated. Second Filters > Normals, Curvature and Orientation > Compute Normals for Point Sets computes the normal vectors for point sets. Afterwards the mesh construction follows: Filters > Remeshing, Simplification and Reconstructing > Surface Reconstruction: Poisson. With octree depth 9 and solver divide 7 the result may be sufficient. You can now decimate the number of triangles or smooth the surface. For details have a look into the tutorial. Very valuable support can be found in MrPMeshlab YouTube Channel. 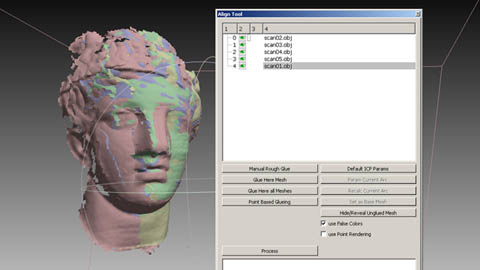