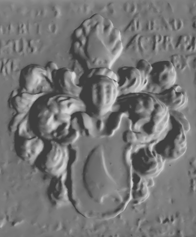 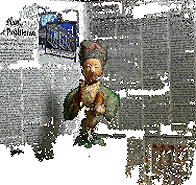 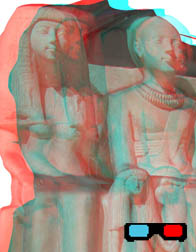 Structure from Motion SFM ist a term from Computer Vision and designates the automated process for detecting spatial structures of objects from corresponding features in images. In Photogrammetry this is also known as multi-image photogrammetry The prodcess is based on BUNDLER, developed at Washington University. The software reconstructs unordered image sequences taken with several cameras. Bundler incoming values are digital images, image features and image correspondencies. The reconstruction provides camera and scene geometry. Bundler is open source software running on Linux and Windows platforms. 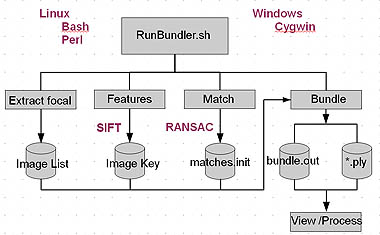 At the outlet Bundler builds an image list with start values for camera parameter from the EXIF information. The next step detects image features, applying the SIFT detector. The algorithm SIFT (scale invariant keypoint detector) was developed by Loewe at the University of British Columbia in 1999. Matching of the keypoints is done by the RANSAC algorithm. Camera parameter, photo positions and object point co-ordiantes are computed by the least squares method. A sample is given in the figure top right, that displays the 3D model of Konaq-Mosque in Izmir.

There are several distributions of SFM software existing. First choice should be VSFM Visual Structure from Motion from Cangchang WU, Univ.Washington, Download from http://homes.cs.washington.edu/~ccwu/vsfm/index.html

An alternative to the desktop solutions are the online services, offered by some companies for free. Known and proved solutions are: 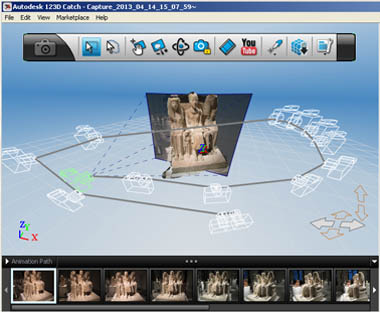 Autodesk 123D Catch is the most sophisticated and powerful tool. A few minutes after uploading the images, a textured 3D model is ready for further processing. It can be stored as an OBJ file or shared as a YouTube video. The objects may be saved in the resolution mobile, standard or maximum. The screenshot above displays a family group from the Egyptian Museum Berlin. Photos taken with Canon G10. Link to the YouTube Video. A click into the figure on the right loads an enlarged anaglyph image of the scene, to be viewed with red-cyan glasses.

In general every exposure arrangement should have distances between the photo positions and enough overlapping approx. 60%. Don't shoot from one point only. Strong sun light and reflections should be avoided. The object surface itself must have some structure. First take overviews, than go closer to the object and try to fill out hidden parts. Another rule is full format photography. The object should cover the full image. If not put additional parts in the scene like the news paper background in the right figure. Avoid changes between landscape and portrait format, zooming in and out is ossible.